These current transformers find the widest application in switchgears for 6 ... 35, kV. The bushing design is of particular value in this case, since in closed switchgears the ability to "pass" the current transformer through the ceiling or through the wall saves the corresponding bushing. The bushing multi-turn current transformer has two bushing insulators as a base, fastened in the middle part.
Through the inner cavities of the bushing insulators, as many turns of the primary winding are pulled as necessary to achieve the calculated ampere-turns, providing the required class of apparatus. On the middle part of the bushings, under the grounded flange, there are cores with secondary windings, which are covered with a casing. Typically, the primary lead-in is located on the top head (in relation to the grounded flange). 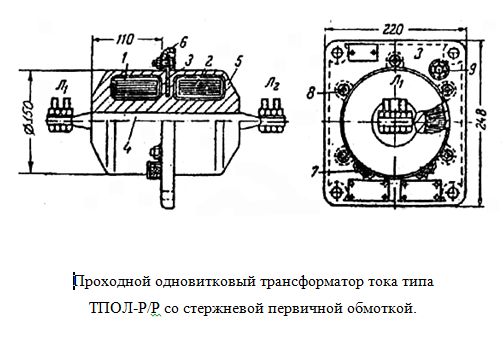 In rod current transformers, the primary winding passes through the core window only once. Therefore, the calculated number of ampere-turns here is always numerically equal to the rated current and cannot be increased. This is due to the specific feature of rod current transformers: the higher the current, the greater the accuracy of the apparatus, and the lower the current, the lower its accuracy. is reflected in the design of the apparatus as follows: the higher the current, the smaller the cross-section of the core, and the lower the current, the larger its cross-section. Since the diametrical dimensions of the core are usually constant for a given series of devices, the following design condition follows from the foregoing: at high rated primary currents, the axial length of the core is small; at low rated primary currents, as well as with an increase in the secondary load and an increase in the accuracy class, the axial length of the core increases.
Rod current transformers can be made with both rectangular and round cores, but in most cases a round core (in principle with the shortest magnetic path) is the most appropriate.