In amateur radio practice, sometimes there is a need for a round-the-clock availability of a low supply voltage obtained from an alternating current network. This can be, for example, security systems, electronic (coded) locks, doorbells, etc. In this case, the supply transformer is permanently connected to the network. To reduce the no-load current (XX) and energy loss, you can use the recommendations - to increase the inductance of the primary winding, which is equivalent to increasing the number of turns per volt and reducing the leakage inductance of the transformer. Of course, it is not difficult to calculate and make such a transformer. However, it is much easier to use a ready-made one.

For this purpose, the author used TVK-70L2 (NI0.479.003) with a primary winding inductance of 20 H and a core of stamped plates with a section of 5.44 cm2. The overall power is approximately 19 W. However, the primary wire of 00.12 mm allows a normal operating current of 22.6 mA, which corresponds to a power of only about 5 W. The voltage on the secondary winding is approximately 10 V. The secondary winding wire of 00.47 mm allows a load current of up to 0.64 A. Data for other types of TVC can be found in the handbook. 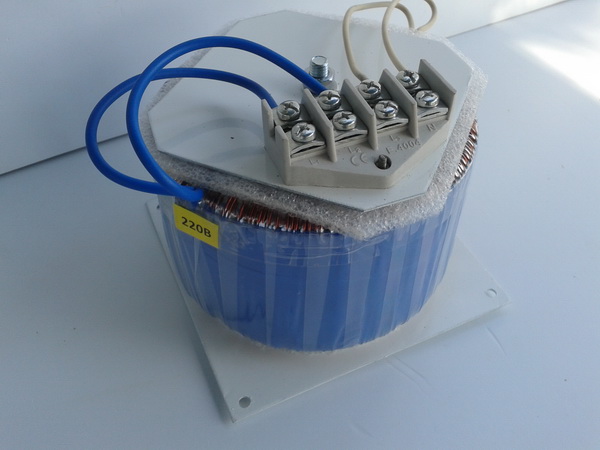 All TVCs are designed to operate with DC bias and therefore have a gap in the core, which increases the current XX on alternating current (the gap is equivalent to the introduction of magnetic resistance into the magnetic circuit and, accordingly, to an increase in leakage inductance). In order to reduce the current XX, this gap must be eliminated. To do this, remove the casing and disassemble the magnetic circuit. The plates are separated from each other and then the magnetic core is reassembled, but otherwise - "over the cover". A casing is put on the assembled core.

The transformer TBK-70J12 converted in this way has a current XX equal to 1.96 mA (Pxx = 0.43W). With a load of 8.5 Ohm, the alternating voltage is 7 V at a load current of 0.82 A. Power in the load is 5.76 W. With prolonged operation under such a load, a slight heating of the transformer is observed, which is quite acceptable.

Similarly, other types of TCEs could be selected and redesigned. After the alteration, it is imperative to measure its current XX.

In conclusion, it should be noted that the efficiency of the entire power supply system also depends on the current consumption of the constant voltage stabilizer. We can recommend a simple stabilizer circuit for a voltage of 5 V, in which it is easy to get its own current consumption of less than 4 mA, which slightly increases the current XX of the primary winding of the transformer, but for the entire power supply system.
The article was published with the permission of the author E.P. Solodovnikov, Krasnodar
Radiomir, 2001, No. 9, p. 14-15