Scientists from the laboratory of the Scandinavian Research Institute of Technology for the Study of Renewable Energy Sources conducted the following experiment. A 200kVA oil-filled distribution transformer was used, which was artificially short-circuited. First, a short circuit was made in a transformer, which was simply immersed in an oil tank (Fig. 1). In a subsequent experiment, the transformer was immersed in a tank made of energy-absorbing material (Fig. 2). In the first case, the walls of the tank were simply torn apart as a result of the excessive pressure of the gases, i.e. products of oil combustion from short circuit. Tank of the second type (new development) remained intact and did not leak. For this experiment, a short-circuit current was induced much higher than the current in real transformers.
So what is the type 2 transformer oil tank? In this case, the energy-absorbing material is nothing more than crushing sectors, like those used in cars, where energy absorption occurs in sequentially deformed partitions. As a result, everything inside the shell (in this case, the body of the car) receives minimal damage. Accidents in high-power substations sometimes take lives, says materials scientist Haakon Nordhagen of SINTEF in Trondheim, the largest independent research organization in Scandinavia. Powerful oil transformers are located both in electrical substations of various institutions and in residential buildings.
And if an internal short circuit occurs, it will cause an electric arc, gas formation and a sharp increase in pressure as a result. According to Nordhagen, the likelihood of such a scenario (especially in developed countries, where the rules for operating transformers are strictly observed) is small. But even a small number of such situations can lead to the death of people and severe damage to property. Therefore, he and his colleagues want to adapt the energy sector. Today transformers are installed in rigid steel tanks. The risk of explosion can be significantly reduced by replacing them with so-called "soft" containers that will absorb the energy of the explosion.
The idea of using crumpled car body technology in the transformer industry initiated a pilot project involving four Norwegian power generating companies. Leading engineers in the field of energy and electrical materials science SINTEF are working on the project. 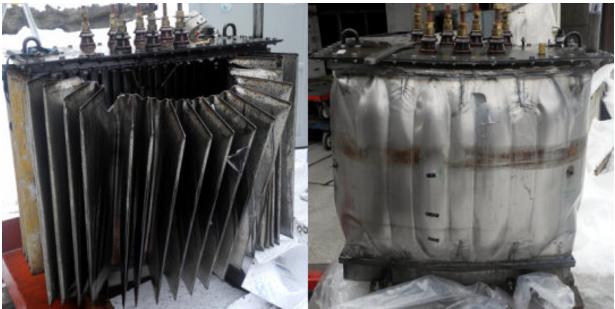 All large power transformers use oil, which acts as an insulator and refrigerant to effectively cool the transformers. This design of the transformer improves its reliability and reduces energy losses in comparison with a dry-type transformer. Improving the energy efficiency of oil-immersed transformers can, to some extent, also lead to the partial replacement of dry-type transformers with oil-immersed ones, i.e. the capacity of the oil producers produced will decrease. Statistics in Norway show that equipment failures occur in about 15 out of 3,000 power transformers in service each year. An electric breaking arc, which is formed during a short circuit, causes an increased evaporation of the oil, as a result of which a combustible gas mixture is formed. In the event of a severe accident, the volume and pressure of the gas increase sharply and the construction of the tank, which was not designed for this, either collapses or an explosion occurs. In case of destruction of the tank, flammable gases leak and their further ignition, followed by ignition of the transformer oil itself.
Structural rigidity has its side effects. Today, there are two main methods used to prevent ignition and explosion of transformers.

1. The transformers are equipped with a protective relay that disconnects the transformer from the mains within a very short time in the event of a short circuit. Thus, the arc is extinguished very quickly.

2. Additionally, transformer tanks are reinforced by welding steel stiffeners on them, which allows them to withstand the increase in pressure inside the tank itself.

But there is one nuance here. On the one hand, the transformer tanks began to withstand the pressure, which was destructive for them before being amplified. But on the other hand, the pressure in the tank, if a short circuit goes into an uncontrolled stage, increases so much that an explosion can eventually lead to the most tragic consequences. High internal pressure is undesirable for a number of reasons:

1. Combustible gases and oil can escape, due to strong overpressure, through seals and joints, which can eventually lead to fire and explosion.

2. All parts of the body and the body itself are subjected to fatigue stress, which is very difficult to calculate in advance. it is not economically profitable to take into account the extreme values of the sections of structures. Moreover, the stress values increase with an increase in internal pressure, which ultimately leads to a rupture of the tank, stripping of bolts, clamps and other structural elements.

Thus, the institute tends to develop an alternative technology for "car bodies". The car body is designed and made with so-called "soft zones" or damping zones, which absorb energy upon impact by crushing. The engineering thought is to make a transformer tank in the same way. As the internal pressure increases, the hollow sections of the tank expand without the risk of rupture or rupture. In this case, additional time is gained, necessary for the automatic operation and disconnection of the transformer from the network. These requirements can be fully achieved with the transformer housing being rigid enough to withstand transportation and vacuum testing prior to oil refueling.
The goal of a recently launched pilot project to ensure the safe operation of transformers is to build a system for introducing this technology into large-scale production. The mathematical model and implementation in metal are constantly being improved at the institute. The main task - to achieve the best ratio of parameters of safe work and optimization of production and material costs, is being successfully solved by Norwegian engineers.