home › News & Articles › Cause and Effect: How to Reduce Harmonic Problems
Products and services
Most read

Cause and Effect: How to Reduce Harmonic Problems

Eliminating power quality issues can help your business save money by optimizing energy use and protecting equipment from future damage.

- Dips and spikes - voltage is lower or higher than expected.
-Harmonics - Frequency effects caused by either the power supply or equipment operating in the system.
-No symmetry - the influence of voltage or current fluctuations on each of the electrical phases.
-Flicker - effects caused by repetitive switching of electrical loads, for example, arc furnaces or other processes.

Causes:
Harmonics are currents or voltages with frequencies that are multiples of the mains frequency, which is 50 Hz. If the first fundamental frequency is 50 Hz, then the second is 100 Hz, and the third is 150 Hz. Here are some examples of problems that can be associated with harmonics:

Flashing lights Is a common symptom of a power quality problem. Equipment with rapid load current or voltage fluctuations is a potential source of flicker. These include, for example, large start-up motors, equipment with cycloconverters (such as rolling mill drives and mine hoists), and machines that use static frequency converters such as AC motors and arc furnaces.
Overheated transformers and tripped circuit breakers can cause harmonic problems, which occur when non-linear loads that draw current in sharp pulses rather than smoothly (sinusoidally) force harmonic currents back to other parts of the power system.
The state of harmonics in a system can be expressed in different ways. The first is total harmonic distortion or THD. THD is the sum of all harmonic effects; this is usually measured up to 50 times the power system fundamental frequency (50 Hz), at 2.5 kHz, or, according to some guidelines, up to 40 times (2.0 kHz). This THD value in terms of power quality is most often applied to voltage. The manual states that the influence of voltage harmonics should be less than 8% in relation to the fundamental. Values higher than those indicated by 8% are for further study.

The first level of research will be to determine the percentage of each individual harmonic, 2nd, 3rd, 4th, 5th - up to the 50th. This is displayed either in real time on the meter or in a diagram from the logged and loaded data - this is visualized as a “harmonic spectrum”.

The approximate spectrum of harmonics shown in Fig. 1 represents a very typical scenario. Voltage THD is in the middle range and is about 3.5% per phase. Note that the largest harmonics are at the 5th and 3rd respectively, and decay very quickly after the 7th harmonic. These harmonics generated by switching power suppliesused in electronic equipment such as computers, monitors, televisions and LED lighting. To a certain extent, these are harmonics that OEMs allow inside their devices. This equipment contains electronic filters that prevent the generation of higher harmonics. Prevention or mitigation is achieved by adding simple networks of passive components such as resistors, capacitors, and inductors. By incorporating this simple security feature into the product, the manufacturer can supply products that meet the required EMC standard. 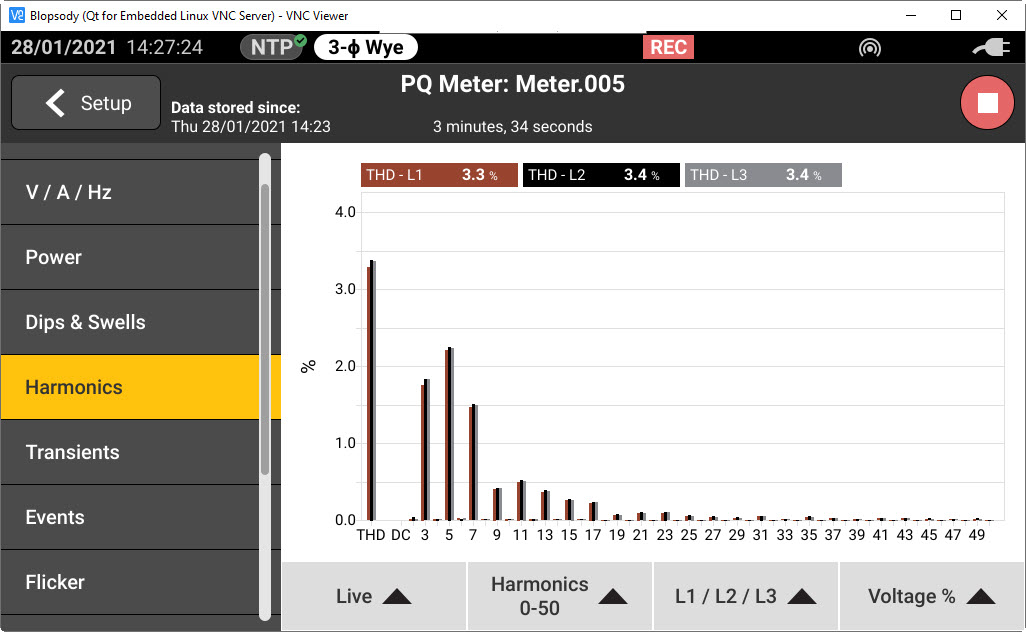 This graph displays the percentage of each individual harmonic. This is known as the harmonic spectrum. Fig. 1

If we look at the harmonics of the current, we see a completely different picture. In fig. 2 shows an amazing level of distortion - up to 40%. This is interesting, but not that important. First, in this case, the current will be low compared to what current is used in the circuit. We describe these two values as IL (load current) and ISC (short circuit current). When ISC is significantly higher than IL, THD for current is not important. The reason for this is that a large difference in these currents is unlikely to affect voltage harmonics. This concept is enshrined in IEEE 519 (Recommended Practices and Requirements for Controlling Harmonics in Electric Power Systems). 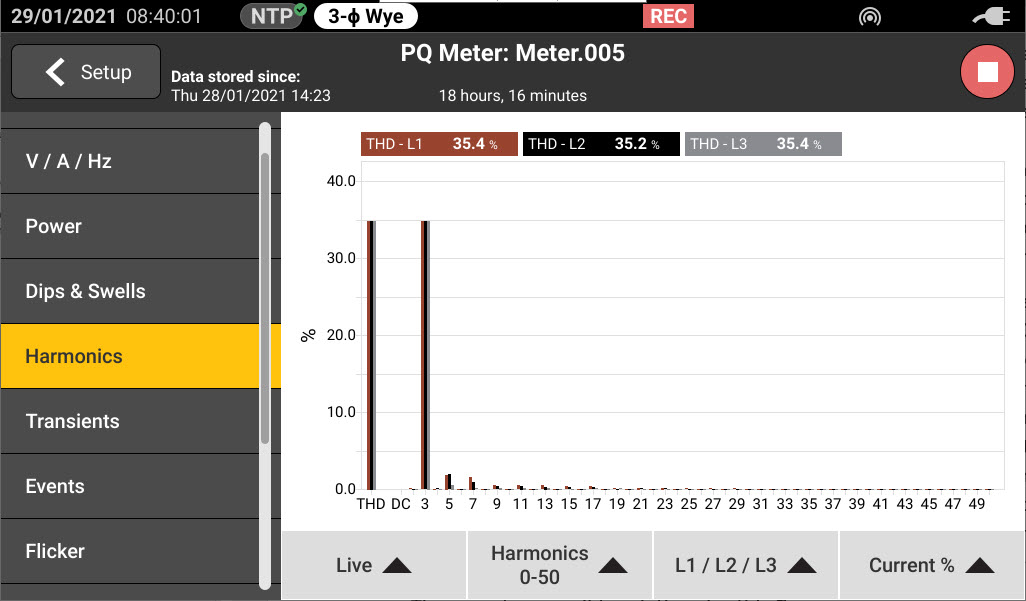 In this screenshot, you can see a high level of current distortion. But does it really matter? Fig. 2

Effects
In industrial environments, harmonic distortion is most often caused by electrical equipment in service. Modern industrial plants contain many pieces of equipment that can contribute to overall distortion - a few obvious examples include frequency converters and inverter-driven motors. These drives take AC voltage and current, convert them to DC, and then generate a variable frequency output so the motors can be controlled more accurately. When current is supplied to the inverter, it is not perceived as a pure sine wave and irregularly accepts current to charge the components that are at the input of the inverter. This irregular consumption distorts the current and therefore the voltage. These inverters can be used to drive motors that are part of an industrial process such as pumping cooling or heating water, liquid materials, moving conveyors or cooling fans. Other types of electronic controls are also part of the process, and each one creates some distortion. When all of this equipment is connected to the same network, distortion in general increases.

Equipment manufacturers are responsible for ensuring that their equipment does not generate unacceptable levels of distortion, and power quality standards are designed to prevent this. But in some cases, when the user creates a unique combination of higher than expected distortion in the electrical network, close to the bandwidth, the distortion can become severe and affect other parts of the equipment. For example, older transformers were not always designed with harmonics in mind. Although some time has passed since the advent of industrial power electronics. From the beginning, most of the loads on the site were linear (where current and voltage are directly proportional - a simple resistive load). If the harmonics are high, distortion can cause overheating of old transformers, and there are two problems associated with this. First, the heat generated is the waste of electricity. Secondly, damage to the transformer is possible, sometimes even catastrophic.

There are two possible solutions.

-Reduce harmonics by installing filters.
-Replace the transformer with a high K-factor transformer that can handle the distortion.
Of the two solutions, both have advantages and financial costs.

Installing filters can be very efficient economically and technically, depending on the source of the harmonic distortion. Finding the specific source (s) requires a study of the harmonics of the equipment connected to the system. It is best to start with the largest electronic drives - consider which equipment draws the most current, such as large drives or powerful UPS systems, to figure out which one has the highest THD. Collect as much harmonic data as possible over several days to see how THD changes and identify worst-case scenarios. This data can then be passed on to the filter supplier, who can advise on suitable solutions for each load. Only one or two pieces of equipment can be the cause of the problem. In the worst case, you will need a larger system, but again, the vendor can advise on a suitable solution.

Replacing transformers is more difficult. Harmonic studies are still required to detect the K-factor, the heating effect due to harmonics. The K factor is derived from harmonics using the IEEE recommended method; however, the right tool will calculate this for you. K-factor transformers are more expensive than standard transformers and downtime due to the installation of a new transformer can be serious and result in significant downtime. However, in some cases, this may be the only viable solution.

Again here, but measurements matter. Knowing the health of your system is essential to maintaining your equipment in order to get the most out of it and maintain a reasonable power consumption.

Power quality studies should be considered routine maintenance. By taking semi-regular measurements, you can detect any changes that may occur so you can find potential problems and fix them early. The period between surveys depends on the opinions of users, but they need to take into account their expectations regarding the reliability of the system - the higher the expectations, the more regular the survey is. This can be monthly, quarterly, semi-annually, or, if you feel you are truly in control, annually.

Performing research on a regular basis will not be such a difficult task if you organize the process correctly.