Why do transformers explode

«I was sitting on the porch behind my house. When I heard a deafening explosion, as if a shot from a cannon right behind my back. I went out into the street, walked a third of the way to the transformer box, when the explosion thundered again. A torch of flame about one and a half meters in diameter and about six meters in height flew out of the box. This happened at half past nine in the morning. Several more neighbors ran into the explosion. When we all gathered, we saw only the burning out of the transformer case. The transformer had been working since 1983 and nothing like that. previously, no one could remember how he worked like a clock. It was quite hot outside, but there were no extreme temperatures.»

What caused the explosion of the transformer? 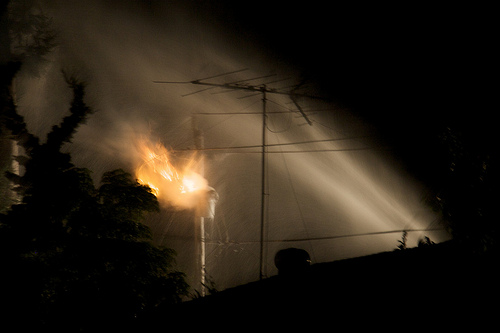 Electrical transformers convert electrical parameters such as voltage and current into parameters that suit the end user. Any transformer is designed for a specific power, which is the rated power of the transformer. But for us in this case, an important parameter is the maximum power of the transformer, if exceeded, the transformer will fail. If the load current increases gradually to its critical maximum value, the transformer will simply overheat. Its insulation materials will lose their properties at high temperatures, a short circuit will occur and the transformer will fail. In this case, the circuit breaker with a response time of about 60 milliseconds will “trip” without problems and disconnect the transformer in the primary winding (at the input).
Now consider the case where the load current rises instantly. The consequences of this can be disastrous. In this review, we consider only oil-filled transformers (as a rule, with an average power somewhere from 500 kVA) The slew rate in this case is higher than the response speed of protective systems (circuit breakers). What could be the reason for such a sharp increase in the load current? In most cases, it is lightning. There may also be sharp gusts of wind, freezing rain and other abnormal weather conditions. In the case of lightning, for example, the current rises to a critical value in 12 milliseconds, which is five times less than the threshold value of the circuit breakers. Transformer windings very hot, the heat is transferred to the cooling medium (in this case, mineral transformer oil). Temperature with such intense heating, it naturally does not have time to be discharged, the pressure in the oil reservoir increases and when the limit of destruction of the transformer structure is exceeded, an explosion occurs. It is like a shower of flammable transformer parts, pieces of winding and splashes of burning oil.
To prevent this, first of all, it is necessary to arrange lightning protection, the transformers should, if possible, be installed indoors, the cooling oil should be low flammable. The cases described often occur in the United States, where a transformer for a house or several houses is located directly on a power line pole. (see photo) Thus the transformer is exposed to all the weather conditions described above. For example on In Manhattan, home to 35,000 indoor transformers and 47,000 outdoor ones, there are approximately 35 explosions every year, most of them open transformers.