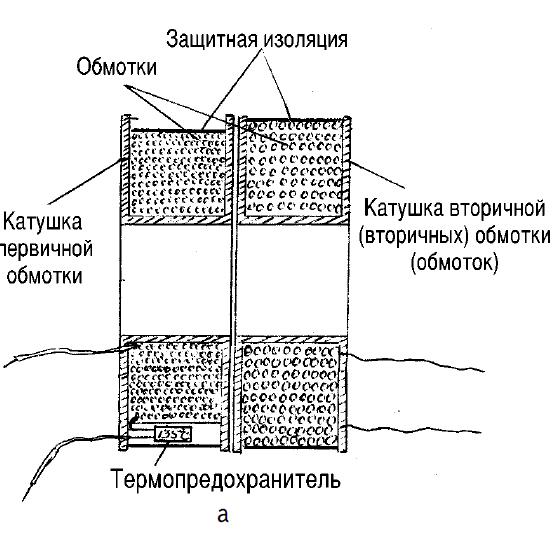 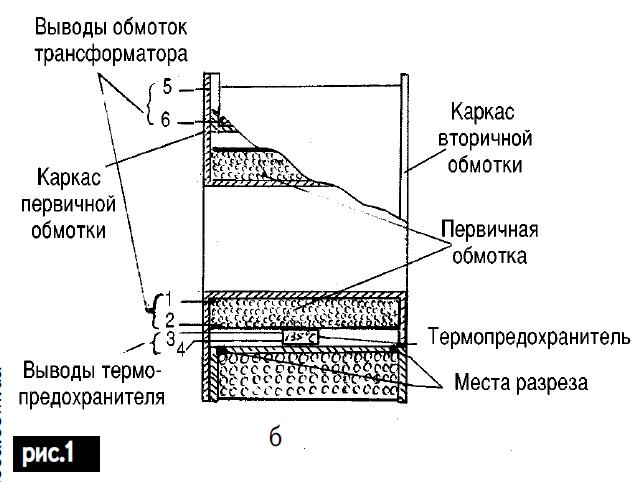 If you managed to restore the integrity of the primary circuit, try connecting the transformer to the network through a thin wire, which will serve as a fuse in the event of a short circuit. If the transformer hums strongly and immediately heats up, it will have to be disassembled, and if not, measure the no-load current of the primary circuit. For good transformers for 200-300 W it is equal to 20-40 mA, and for "squeezed out" low-power up to 80-90 mA. For powerful transformers 200-300 W, this current can be 300-350 mA.

If disassembly of the transformer necessary, free it from all the reinforcement, and if the plates are not welded, as shown in Fig. 2, try to gently knock the plates out of the frame. If they get stuck together, do not bend or break the plates - this will not help, especially if they are thin. In this case, the core is sufficiently heated and easy to disassemble. If the transformer is small, it can be heated by putting it on a hot soldering iron for 15-20 minutes, and if it is not possible to heat the core to 130-150 ° C on a soldering iron, heat it on an electric stove or, in extreme cases, on an inverted iron. At the same time, check the hardness of the compound with which the transformer is glued and do not be afraid for the frame: it can easily withstand such temperatures. It should be noted that in this way it is possible to easily disassemble glued ferrite cores, including armored type SB, although in the latter, especially of domestic production, the frame can be deformed.

If welded transformeras shown in Figure 2, don't be upset. Your task in most cases is simplified or at least solvable: with a hacksaw for metal, as shown in Fig. 3, make cuts along the seam of electric welding. Moreover, for the core in Fig. 3, a, it is enough to make one cut and bend the jumper, and for the core in Fig. 3, b it is better to make cuts on both sides. It will take you no more time than heating up the transformer. If, after sawing the welds, the coil cannot be removed from the core, do not knock on it hard, it is better to warm it up, as mentioned above. Well, now you have finally disassembled the transformer without damaging the plates and keeping them all! This is especially important for miniature cores. If your transformer has a coil design, as shown in Fig. 1, a, proceed to unwinding the primary winding. I cannot recommend cutting off the winding followed by winding “until the frame is full”. This is the simplest way, but quite often it leads to unpleasant consequences, especially if it is serious equipment. And if the coil structure is as in Fig. 1.6, and the frame does not move apart due to melting, do not use much force. They will break and still cannot be disassembled. Wind the secondary winding, count the turns, and then around the perimeter with a hacksaw blade for metal in the places shown in Fig. 1.6, saw through the secondary winding frame and remove it, leaving the frame cheeks in place, bearing in mind that there is no need to restore the frame: it is enough to lay good insulation between the primary and secondary windings. In addition, you will have a margin "for the window" due to the thickness of the removed frame. It is far from always possible to unwind a sintered winding in one wire. Yes, this is not even necessary. Even if you unwind 1-2-5, 10-100 turns and write down their number in order to sum them up later at 2500-3500 turns, you will be mistaken by no more than 100 turns, which will not radically affect the operation of the transformer. But if in doubt, it is better to increase the number of turns of the primary winding by 100 than to decrease it by 50.

However, when disassembling low-power transformer it may turn out that the primary winding was wound in two wires (usually of different enamel color). In this case, it is necessary to count the turns by their real number, and when you wind them in two wires, do not forget to set the counter to half the value. Such transformers are used in very cheap equipment, and this method of winding reduces the cost of it even more, which cannot be said about reliability. However, attempts to wind such a transformer in one wire are often not justified. Moreover, while winding the coil in two wires, they must be laid as close to each other as possible, for which I use a piece of PVC tube of the smallest possible diameter, as shown in Fig. 4. In this case, the turn-to-turn capacitance of the winding increases, which leads to a slight increase in the reactance, i.e. to a decrease in the no-load current, which in such transformers is already close to the critical one. 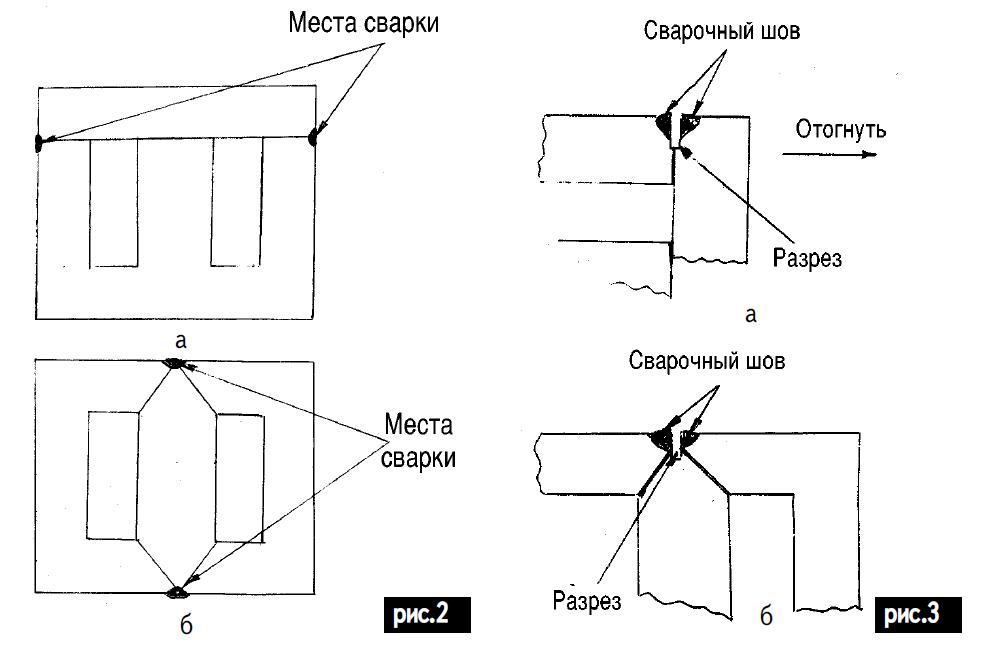 In such transformers, you need to be very careful when choosing the diameter of the winding wire: with a smaller diameter transformer does not give out the initial power, therefore it overloads and overheats, and with a larger diameter, the resistance of the primary circuit decreases, which leads to an increase in the no-load current, and the transformer also overheats and fails. I would like to note that in all cases of transformer repair, strive to use domestic winding wires. Their enamel coating is much stronger and more reliable than imported ones. Now you have wound all the windings, and they fit into the frame. It remains only to assemble the core. The easiest way is to assemble a welded core that you have not deformed when cutting. Remove any burrs from it and bond with epoxy. To avoid the formation of magnetic gaps, clamp the core in a vise until the compound has cured.
If you are assembling the transformer "over the cover", then before the end of the assembly, when the plates are still not very tight, insert the two plates in the same direction, as shown in Fig. 5. Then at the end of the assembly, when the plates are already difficult to enter along the frame, you can relatively easily insert them between the one-sided plates, without risking damage to the frame and the winding. And only then install jumpers.
From low-power transformer you should not have a single “extra” plate or jumper left. This leads to a sharp increase in the no-load current. Check the no-load transformer for compliance with voltages and especially no-load current, and only then assemble the fittings, maintaining the relative position of the fasteners and transformer terminals. It is tempting to repair power transformers for microwave ovens, which, apart from magnetic shunts, practically do not differ from ordinary repair of one transformer (given their wide range) is hardly economically justified.
Finally, about the "pitfalls" when working with thin winding wires. Who is not aware of the phenomenon of wire breakage during coil winding or wire shortage. Don't be upset. It's OK. If this is a winding of a power transformer, wound in bulk, then connect the wire using the soldering method and continue winding. Pre-insulate the junction, as shown in Fig. 6, with insulating material, preferably with capacitor paper, in thickness corresponding to the diameter of the wire. If necessary, the paper can be laid in several layers. As a last resort, use regular high-quality writing paper, preferably coated. Make sure that the connection point on the coil is not from the side of the core window, but from the end: this will save you from the unnecessary problem of placing the winding in the window. If it is: a high-voltage coil a (for example, an ignition coil or a winding of a fuel assembly, TDKS), then it is additionally necessary to get rid of the sharp protrusions of the soldering points. 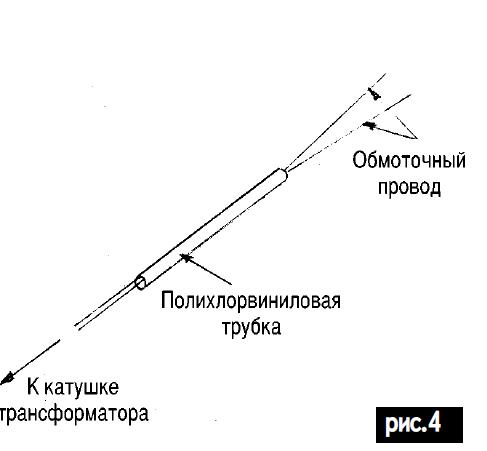 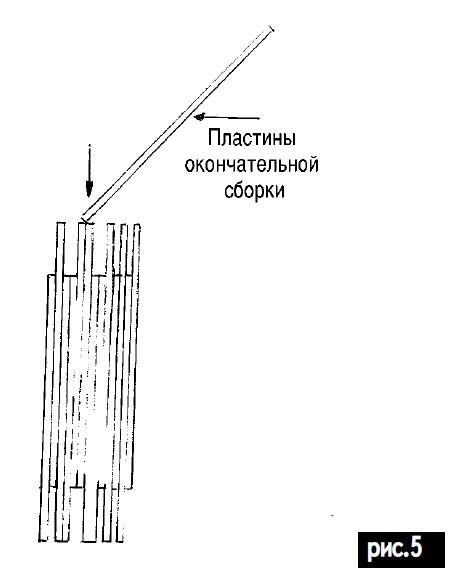 If you tried it, you probably encountered another unpleasant phenomenon: it is not so easy to neatly solder a thin wire. The soldering point turns out to be fragile and most often point-like. But even in this case, there is a simple way out. Considering that usually transformers contain several thousand turns, you can afford to overuse a few tens of centimeters of wire. Fold the two ends of the broken wire together and cast on several loops, as shown in Fig. 7, a. Such a bundle is already felt in the hands and can be twisted (Fig. 7.6). Now, roll the formed bundle between your fingers, holding the winding wire, stepping back a little in Fig. 7, b, and you will get a beautiful uniform twist of the winding wire, which is easy to tin. Then cut off the excess twist and form the joint, as shown in Fig. 7, c. But keep in mind that, having connected in this way a conductor with a thickness of 0.2 mm or more, make sure that the curls of the twist are connected by soldering, otherwise, with outwardly beautiful soldering, the wires may remain isolated from each other: the wire is not deeply tinned in the curls.
And the last thing. If you wound the winding in two wires, apply the principle: "measure seven times, ...". You must be absolutely sure that the beginning of one conductor is connected to the end of the other, only then can the transformer be tested. 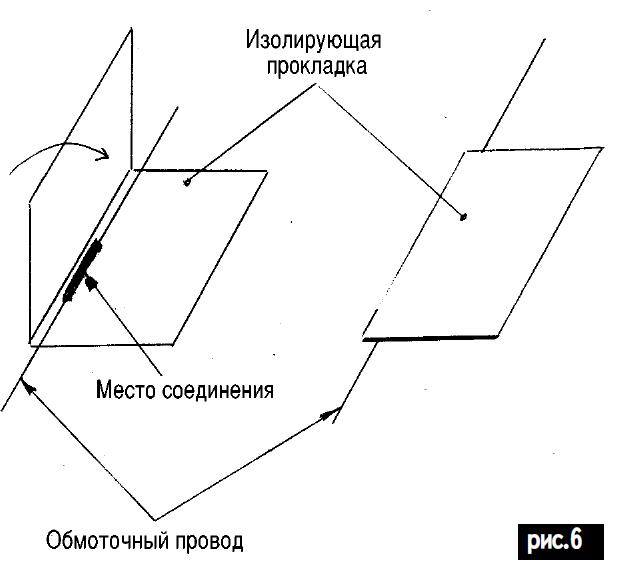 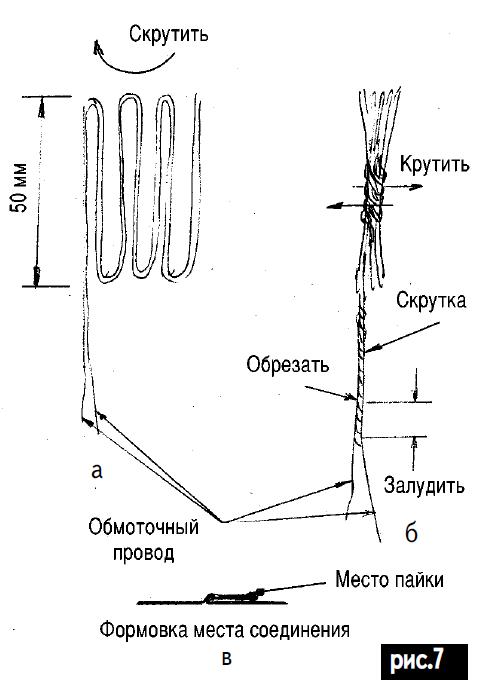